Nobody likes a slow and sluggish rig. How much power is enough?

I am always tinkering with parts and an engine is no different. A weekend of wrenching, headache, and beer drinking in the garage that squeezes out 4 more horsepower from your 4×4 would a successful weekend!

In the world of rock crawling, drivers can pull off some seemingly impossible maneuvers. Drivers do need to train, and a solid rig is essential. But without the right engine, none of that will matter much.

So it’s essential to consider what kind of engine you want for your rock hopper. When doing so, there are some crucial factors to keep in mind.

There are many aspects to the art of rock crawling. But the most important ones to consider when it comes to engine selection are mileage, power, reliability, and build era. The first three are easy to understand.

Power is probably the single most important spec we look at when building out a rock crawler or rock bounce. Reliability refers to how many times you can expect it to keep your rig moving before it breaks down.

These days building a new 12-valve 4BT cummins isn’t a bad choice, but there are engines that were built at least 20 years ago that can still be found in good running condition, which is often the case with vehicles that have been off-roading for decades.

Or some time, money, and love a rebuilt one of these suckers can give you a few decades more of fun. Let’s dig in

Of course, the need for good gas mileage does not detract from the importance of your engine’s power. The amount of power your engine can generate, especially at lower speeds and at specific RPM ranges, can be the difference between impassable terrain and a minor speed bump on your rock crawling path.

Rock crawling is not exactly easy on your rig’s engine or frame. Some motors may check all the boxes, but if they’re not reliable, your rig may be spending more time in the shop than off-road.

A variety of engines from different periods are used in rock crawling rigs. This can be a matter of preference, but there are pros and cons to both older and newer engines. For example, an older engine might be cheaper to obtain and modify for extra power, but mileage and reliability may miss the mark.

What Are the Best Rock Crawler Engines?

The best rock crawler engine is subjective. Depending on your needs, a specific engine may be a better fit than others. These are some of the best engines for your consideration.

This is a high displacement motor, so it doesn’t exactly sip fuel, but the high power to weight ratio is hard to beat. The LS3 isn’t exactly cheap, either. On average, these engines will cost you around $7,000.

Long respected in the drag racing world, the generous helping of power available in the lower RPM ranges makes this engine a champion in off-road situations, as well. Compared to the LS3, it’s also a bit easier on the wallet, with an average cost of $6,000.

These engines are a little more off the beaten path, but they are great and powerful engines for your rock hopper, nonetheless. The third-gen AMC V-8 was produced from 1970-1991, so depending on which iteration you obtain, the power ranges anywhere from 125 to 255 horsepower and 220 to 435 lb-ft of torque.

Because of these engines’ origin and relative obscurity, they are inexpensive to purchase if you can find one at a wrecking yard. They can also be very reliable if maintained correctly.

However, certain motor parts may be challenging to find for repairs since these parts are no longer produced. In all, the power and torque and the reliability available here for the lower cost make it an economical choice.

You can find Nissan’s Endurance V-8 engine in their Titan truck. Aluminum cast and weighing in at just under 500 pounds, this bruiser churns out 317 horsepower and 385 lb-ft of torque.

The power levels of the Endurance V-8 pale in comparison to some of its counterparts. Still, the efficiency, reliability, and low-band torque may be enough of a draw, especially if you own a Nissan rig. The price varies, usually on the lower to middle end of the spectrum, depending on which wrecked Titan you can obtain it from.

The first big block engine on this list, the HT502, produces a whopping 512 lb-ft of torque and 377 horsepower. This engine is cast-iron and sizable, weighing in at 650 pounds, so the rig it’s placed in will have to be suitably sized, which isn’t great for power to weight ratio.

Otherwise, the torque available at such low RPMs will amaze you. Obviously, fuel efficiency is a factor here, but if your objective is pure power that you can only find in a big block engine, look no further. The price tag is a bit hefty, nudging $7,000.

It’s nearly impossible to talk about off-roading without bringing Jeep into the conversation. And their famed Mopar inline six-stroker engine really gets the job done.

The power output is relatively modest, especially when the numbers are lined up against its competitors. It produces 270 horsepower and 240 lb-ft of torque.

But with its size being equally modest, the fit is easy for most rigs. And many rigs are practically built for this rock hopper engine. Performance modifications are also available if you feel like you need some more power. At an average price tag of $5,500, it’s relatively easy on your pockets.

The importance of a solid engine for your rock hopper is obvious. But there are many factors to consider. It’s easy to opt for the biggest, most powerful engine available for your rig, but that may not be the best choice.

Weigh all the pros and cons when making your decision. Doing this will ensure that your rock crawler is the best terrain conquering monster that it can be!

The best rock crawler engine will depend on what you’re looking for in your engine, but the most important thing is that it’s reliable and powerful enough to get you through whatever terrain or obstacles come your way.

You also want something lightweight so as not to add too much weight to an already heavy vehicle – especially if you’ll be traveling far distances with people who are doing all of the work! That being said, there are many options out there when it comes to engines, so take some time now and figure out which one meets your needs before making a purchase decision later on down the line. 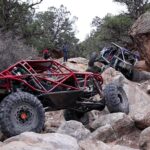